The other night I read a letter from 1942 written by my father to his mother while he served in the Army during WWII. He was 22 years old. He wrote to her about a trip she was planning to take from Illinois, where she lived, to Texas. He wrote, “I don’t think you should go to Texas. When we came through there they had separate waiting rooms for colored and white all along through those southern states…a third of the car for colored people to ride in so they wouldn’t be mixed up with the white folks. If I were you I wouldn’t go.”

His words of caution stemmed from the fear of violence or harm that could come to a loved one because of the color of her skin. My dad’s experience in southern train stations spoke volumes. “You’re not welcome here.” “You aren’t the same.”, “You are less than.” “You don’t deserve equal.” “Go to the back.” “Something bad might happen to you.” “You can fight in this war, but you can’t sit up here.” The same messaging and injustice my dad experienced in 1942 is shaped differently, but still exists in 2020.

One week ago, George Floyd was judged by the color of his skin, not by the content of his character and people are mad about it. He died as a result of racism and brutality by police who are supposed to serve and protect. People are mad about it. People are mad about the other black men and women who were automatically viewed as a threat and killed because of it. Trayvon Martin, Freddie Gray, Eric Garner, Philando Castile, Alton Sterling, Michael Brown, Breonna Taylor, Sandra Bland, Tamir Rice. Those are just a few whose names I can easily recall, but these deaths, murders really, could have been prevented had they received the type of love, grace, and justice afforded to White America. People are mad about it and are non-violently protesting for change. Hallelujah!

If Blacks weren’t feared, treated as less than, given unequal treatment, but welcomed, loved, and respected, these lives might not have ended the way they did. Each of these incidents reinforces the messaging that we (Black people) should be afraid, aren’t welcome, and cannot freely navigate public spaces. We have repeatedly seen that anything could happen. Be on your best behavior, but even then…you’re not safe. All of these traumatic incidents reinforce fear and anger, leading some (NOT ALL) toward violence.

It was 57 years ago when Dr. King dreamed of his children not being judged by the color of their skin. A dream all Black parents have, and that dream has not been realized by many of us. A dream deferred.

What happens to a dream deferred? Does it dry up like a raisin in the sun? Or fester like a sore—And then run? Does it stink like rotten meat? Or crust and sugar over—like a syrupy sweet? Maybe it just sags like a heavy load. Or does it explode?

As Hughes spoke of his people in beloved Harlem, he suggests there may be different reactions when dreams are deferred or never realized. For some, the loss of a dream will cause them to wither. Others will have an open wound, susceptible to infection. Some will rot away and never offer their gifts to society. Some will be hardened, impenetrable to goodness. Others will carry the loss as a burden too heavy to bear. Some will explode into riot or rebellion.

I believe the actions we are seeing in the streets across America this week are partly a result of a dream deferred. As an African American, I do understand. I too feel pain, anger, and fear. I write this to share my perspective on the current chaos because the Good Word says, in all your getting, get understanding. As we seek first to understand, we do so not to condone, but to be better equipped to help. So let’s do just that.

Equipped with understanding, lets help by talking to each other. Loving each other. Let’s choose to center our self, calm our mind, and strengthen our resolve to be the change we wish to see in this world (Mahatma Gandhi). Let’s focus on good things that will build us up and not tear us down or apart. Words and actions which nourish and strengthen our character and spirit for the work to which we have been called.

I’m encouraged by the diversity of people I see in these peaceful marches, regardless of those causing violence and distraction from the real issues. I’m encouraged by people willing to speak up for us when they see injustice. It’s because of this I believe the dream can be achieved, but only if we do it together, across differences in race, politics, and religions. Together, let’s strive to achieve the dream of which our forerunners spoke. 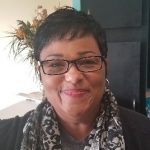 Author, Lori Brown, MA, MSW
Lori Brown is the Mission and Professional Development Coordinator of the CYFS Training Department. She has thirty years of professional experience in social service, and academic credentials in Social Work, Psychology, Sociology, and Spiritual Formation. Lori has been with the agency for seven years, helping to equip staff with essential tools to serve. Her goal is to focus on making sure our mission is known by all and woven throughout everything we do.

Some additional and useful resources to help promote discussion: