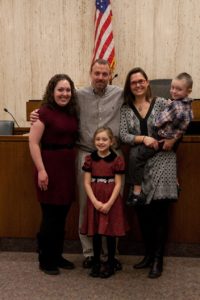 With Mother’s Day just a few weeks ago, and Father’s Day coming up, The Center for Youth and Family Solutions would like to recognize the role that parents play in creating the family unit and ultimately in our society. No matter what a family looks like, whether it’s a mom and a dad, two dads, two moms, one parent or grandparent, being a part of a family gives children a feeling of belonging and identity. For the children served by CYFS, the concept of a forever family is significant.

Among those providing a forever family for two children, are Darrin and Kim. In December 2013, they adopted a pair of siblings, whom they had been fostering since June 2011. “When Kayly and Kayden first moved in with us, we didn’t know that we would eventually adopt them,” says Kim. “We knew they needed our help, and we were going to be there to provide them a safe home.” The siblings, 2½ and 3½ years old at the time, were “fairly adjusted,” when they started living with Kim and Darrin, though like many kids in a traumatic situations had their struggles. Quite memorable for Kim were the nights spent trying to console the children as they lie awake crying for hours, but she quickly also mentioned happier memories including birthdays, holidays, and summer days splashing in the family pool. She described their experience as the normal things many parents go through, and then some.

In November 2012, Kim and Darrin began the adoption process for Kayly and Kayden, in addition they took in another pair of siblings who had come into foster care. Though there were bumps in the road, Kim held on to her faith that things would work out in the way they were intended, and she gave that advice to potential foster parents. “You have to go into it with a selfless motivation and make the best of the time you have,” she said. Their CYFS Family Worker Angela commented, “Kim and Darrin are an amazing couple. They have been through a lot through this process and have created a loving family that Kayly and Kayden deserve.”

At the adoption hearing, surrounded by grandparents and family friends, as the judge asked Kim and Darrin a series of questions, then announced Kayly’s new name, the 6-year-old proudly whispered, “That’s my name,” with huge grin on her face. They sense of belonging and identity was not lost on the little girl with a forever family.

For more information on the adoption programs offered by The Center for Youth and Family Solutions, please visit adoption services.